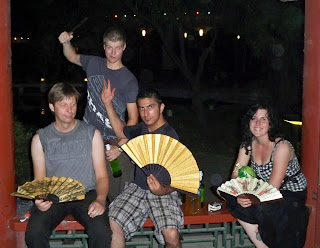 Circles in the sun, or how I got to go to the camp after all

Not being able to attend the trainings camp was one of the major downers this year – but I had already promised my pen pal in that I would see him in fall, and doing two big journeys in one year was simply beyond my budget as a student. So I was more than excited when an opportunity suddenly and unexpectedly turned up: A Neuroscience conference in , and my University paid for everything!
This little miracle allowed me to at least get an impression of the camp – I got to stay with everyone else for one single day and one single night.
We practised in the middle of a dirt path. People walked by and smiled at us (maybe they were laughing about the foreigners who tried so hard to do what their Chinese teacher had just demonstrated…), occasionally we had to step aside to let a truck pass. There were a lot of application to help us understand what we were doing, and at the end of the day, most everyone was pretty dirty from falling and rolling around on the ground.
I was so happy and glad I finally got to train in with a Chinese teacher (Xu Laoshi) and with my friends from home, that I did not really notice the basking sun; only afterwards did it come to my mind that I had consumed about two liters of water during the three hour practise session. The day was neatly wrapped up with a delicious dinner at the hotel and an evening stroll to the city.
The next morning started early with Qi Gong at 6 am – first, to the relaxing sounds of appropriate music, later the hotel turned up the speakers and many of us had to stifle a giggle when we realized that we were doing our exercises along with a Chinese version of Titanic’s “my heart will go on” and Emilia’s “big, big world”.
After breakfast, I was able to attend another Ba Gua session. Xue Laoshi drew circles on the ground, and for a few hours, these circles assumed a central role in our lives – they were home, prison, form and freedom all in one. Walking round and round, we practised the basic movements over and over again. The session was over much too soon.
Having to leave while everyone got to stay for another week was really hard. On the other hand, the impressions I got are invaluable. Next time, I hope I will be able to attend the whole camp – two full weeks. And if I have to spend that time walking in Ba Gua circles in the hot sun, I will be more than happy to do it.
Regards,
Silke
Schlagwörter: Beijing